This is Kuan Yin’s origin story:

Miao Shan was one of three daughters of an emperor. After her sisters were married, the emperor tried to marry Miao Shan off. She refused to marry, saying she’d prefer to follow a life of religion. She entered a monastery. Her father was furious and tried to make her life there very difficult. But the barren garden she tended became full of life. And a bubbling spring showed up next to the kitchen.

Her father the emperor was still furious and ordered the death of his daughter. Miao Shan was taken to the woods to be killed. But when the soldiers arrows flew towards her, all of them missed. A beautiful tiger came to her rescue and carried her to a cave.

The Buddha came to Miao Shan and gave her instructions to go to Pu Tuo island. She followed the Buddha’s instructions. At the moment she could have stepped into the light, she decided to stay on the Earth until the suffering of all beings was relieved. From that moment on she was known as Kuan Yin, “She who hears the cries of the world.” 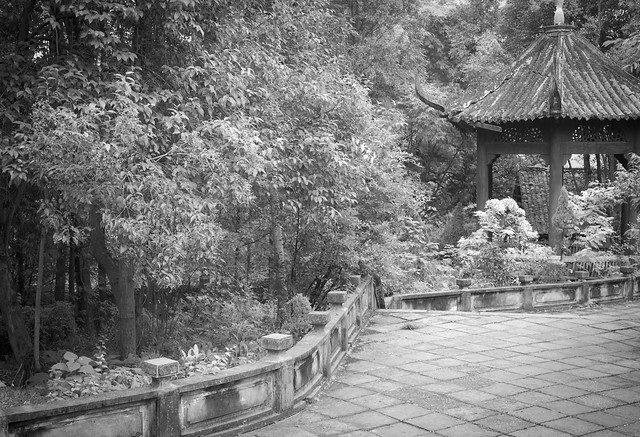 Path at the Kuan Yin Temple in Xinjin County, China