The best-laid schemes o’ mice an’ men gang aft a-gley–and also those of polytheists. For our August devotional, I’d planned for Thiasos Bakkheios to have a high-woo trance journey, so that each member could meet the god in person, and discover which aspect of Dionysos they most resonated with.

Well, no. Scheduling problems, on-the-job injuries, and just plain bad scheduling conspired to make it seriously uncertain who (if anyone) was going to be able to make it, and guaranteed that at least a few folks would not be in the right space for trance work. So, thought I, let’s just have a dinner party in his honor.

Dedicating the time and effort and resources to cooking up a fantastic spread for the god is one of my favorite forms of devotional work. Moving (dancing) about the kitchen, hands-on raw meat, fire on the stove… It gets me high, when mixed with thoughts of Himself.

So we had a feast. Beef, rare and not so rare, rubbed in a Greek spice mix. Mushrooms and bacon, sauteed in wine. Dates wrapped in bacon and roasted. Blackberries and raspberries, olives, bread with dipping plates of olive oil, vinegar, and parmesan. Joey, who changed his mind at the last minute and joined us despite his injury, brought chicken legs baked in bean and cheese sauce. And, of course, mead and wine. 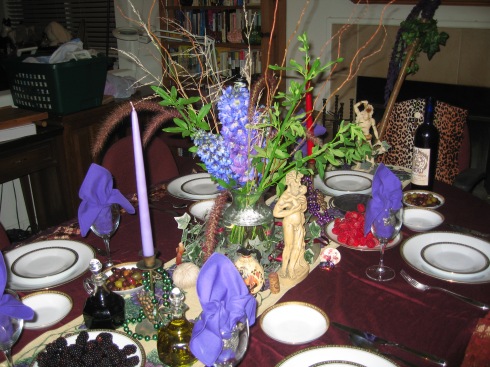 The chair at the head of the table was draped in leopard-print, and the that place at the table held his idol, and his plate and wineglass. Nearby were dishes for offerings to other beings, and the usual altar items were arranged as a centerpiece, around a vase of flowers. 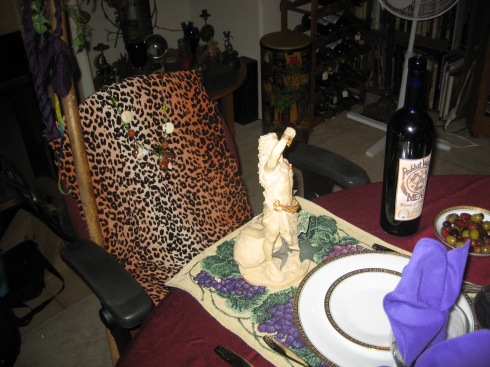 Then came the prayers to the gods, first to Hestia (without whose flame, the gods would not receive their portion), and then to those beings who were and are Dionysos’ kin and companions, and then to Dionysos himself.

For Himself, we laid a full plate and a full glass, and invited him to join us at our table. No one doubted his presence.

And then to feast! There was much juggling of laden dish, attempting to pass things around without spilling or knocking over the candles and icons. Some business of the Thiasos was discussed, and also many matters mundane and spiritual. And, there was laughter and fellowship.

And Cards Against Humanity.

After we were all stuffed and had run out of more specifically Dionysian things to speak of, it was suggested that we play Cards Against Humanity. Not wishing to exclude the guest of honor, we dealt a hand for Dionysos, and evolved a way for him to play.

For those not familiar, Cards Against Humanity is essentially a trick-taking game, where one player gives the table a phrase with missing words, and the others “bid” cards with words to fill in the blanks. The first player to take ten tricks wins the game 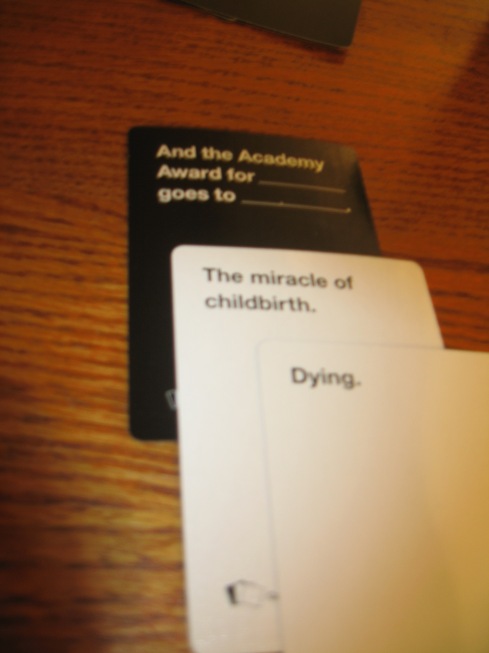 The god played passing well, taking five tricks. It seems, however, that he was not playing to win, but using the opportunity to shape the phrase into a message for someone at the table.

For Ember, the cards the god bid on her turn had a consistent theme, summed up in this bid: 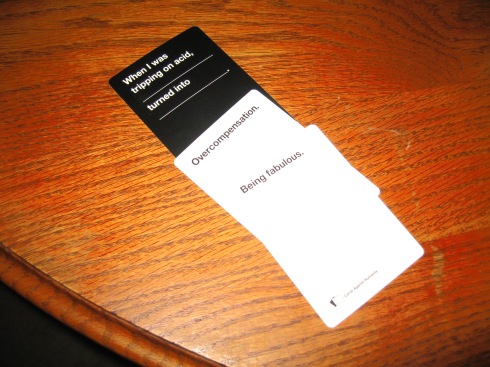 “When I was tripping on acid, overcompensation turned into being fabulous.” She took this string of messages to be advice to get out there and do her thing, even if she was afraid it would fall flat.

Dany didn’t get quite so coherent a message, but the god bid the card “Hope” to her several times. Given the dire economic and health problems she’s been facing, she took that as a good sign.

We closed with further prayer and thanks, and then cooperative clean-up. The clean up went well, though it’s easier when it’s one of those gatherings that did not involve tearing animals apart in ecstatic frenzy.

There was a lesson here for us, I think. The god manifests in our lives, sometimes in surprisingly mundane acts, when we make room for him. Life won’t always go as I hope, and this will impact the work of our devotional group. He’s saying that he’ll be there with us, even if we don’t end up doing what we had initially planned.

We had hope that he’d play cards with us, but we didn’t expect him to speak to us through them. I would not have expected Cards Against Humanity to be an oracular tool, but I’ll take what he gives me.